Just because you’ve cut out gluten and grains, doesn’t mean you can’t dig into a sandwich, especially this paleo sandwich! It’s a tower of  Mexican pulled pork, coleslaw with home made mayo (& this mayo takes one minute to make) & creamy avocado all served between Paleo pizza bread! OMG…this is a recipe that has to appear on your weekly menu, doesn’t matter if you’re paleo or not! 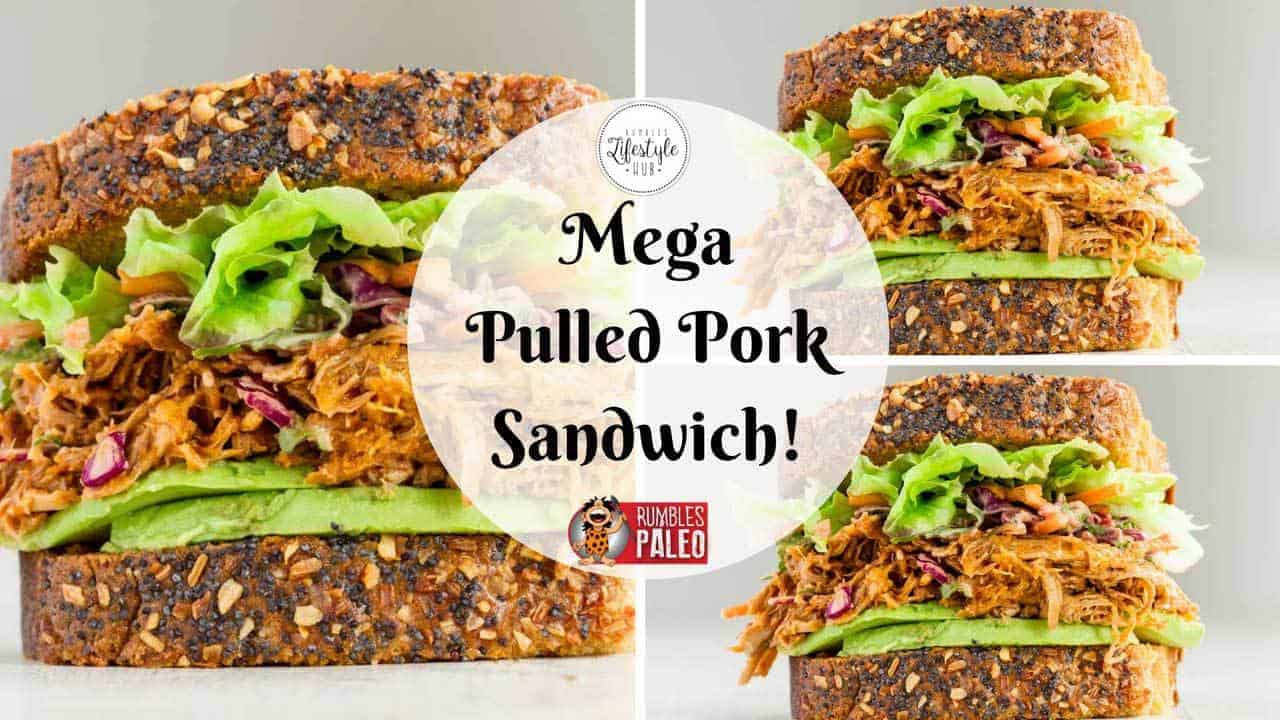 As a child I actually refused to eat most foods. From about the age of five, the only so-called “decent” thing I would eat, was vegemite sandwiches. Like most kids, I of course loved anything full of sugar (cakes and cookies were my favourite), but at meal times, a thick slathering of vegemite between too doughy pieces of white bread, was all I wanted.

She’d try to serve me up every food known to man, but I’d mostly refuse. Upon her insistence, and with quite a bit of disgust, I’d begrudgingly swallow down a few other foods: carrot, a little mashed potato, a mouthful of meat here and there.

But after a few mouthfuls, I’d be done. There was no way I’d have any more.

Many parents might have force-fed a child such as myself, or been of the opinion to just let me starve because then I’d eventually get hungry and have to eat something.

But my Mum was a softy, and I guess she thought it better I eat something at dinner time, rather than nothing at all.

So out would come the bread, butter and the king of all sandwich toppings (or so I thought at the time) – thick, dark, salty vegemite that she’d slather onto my bread thicker than mud! I loved vegemite so much, I’d eat it off the spoon, and on the rare occasion, I still do.

So I guess you could say, I’ve had a love affair with sandwiches ever since I was five, which is over thirty years now!

As I got older, thank goodness my tastebuds matured! The only food I truly can’t tolerate these days  is seafood (and that aversion actually comes from an experience I had when someone did force feed me fish, so maybe I should be extremely grateful mum never decided to force feed me other foods over all those years).

I truly believe, that you could stick anything between two slices of bread and it would taste phenomenal. Do you agree?

And if I did eat seafood/fish, then I do believe even that would taste bloody awesome between bread too. Fish eaters, do you like fish sandwiches?

Don’t you agree, that when you layer bread with meat, or salad, or veggies, or sauces or all of the above, that the fillings take on a whole new taste dimension of amazement? I don’t know what happens? But it’s like the bread puts a magic delicious spell on the fillings and they instantly become more delicious-er than ever! Not even Harry Potter can perform spells as good as this.

Ok, so this is a Paleo website, so why are we telling you to eat sandwiches?

Well because when you know how to make Paleo bread, sandwiches can be a regular healthy part of your life…hooray!

Now since I’ve been the Queen of Sandwiches since I was a young child (even if I do say so myself) it’s quite logical that I would be the Queen of Paleo Sandwiches too! So today I’m bringing you a mini booklet containing all the recipes for my new favourite sandwich which I like to call: The Leaning Sandwich Tower of Pulled Pork Pisa (to be honest, that’s the first time I’ve ever called this sandwich that name, sorry for lying!) 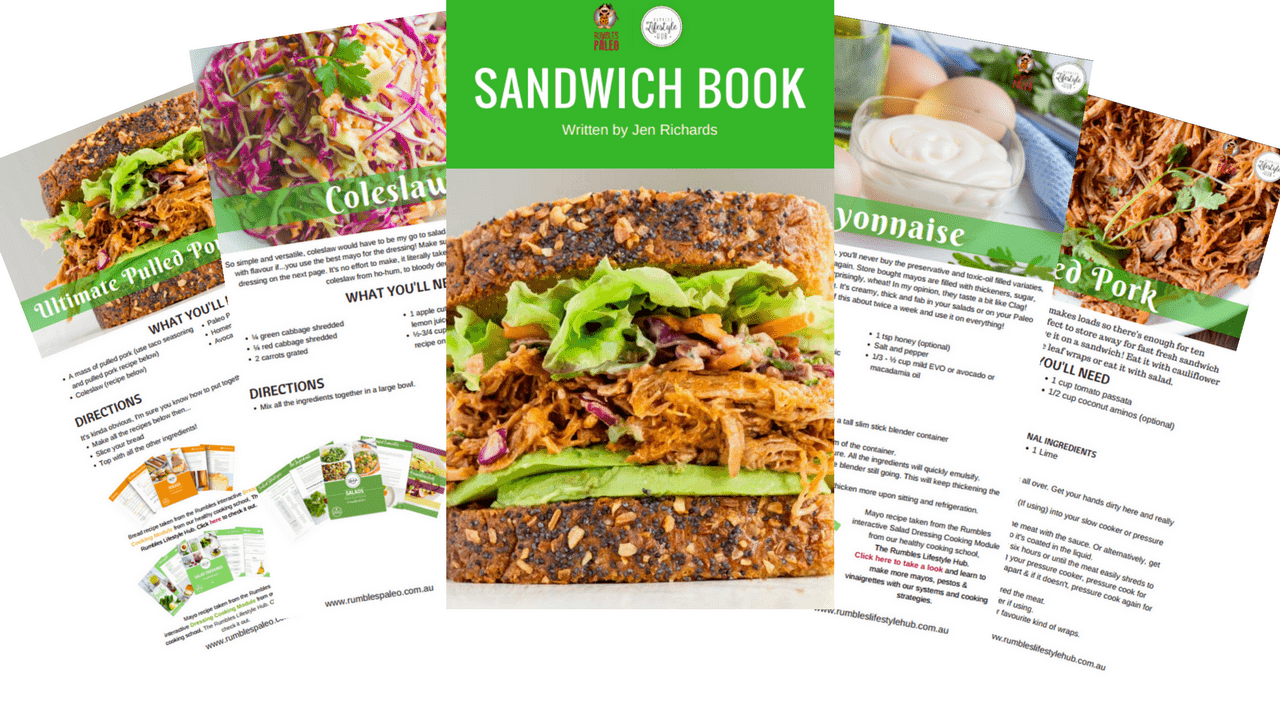 In the booklet you’ll find recipes for:

And once you make all those elements, this is what you’ll have! And yes, you’re allowed to lick the screen… 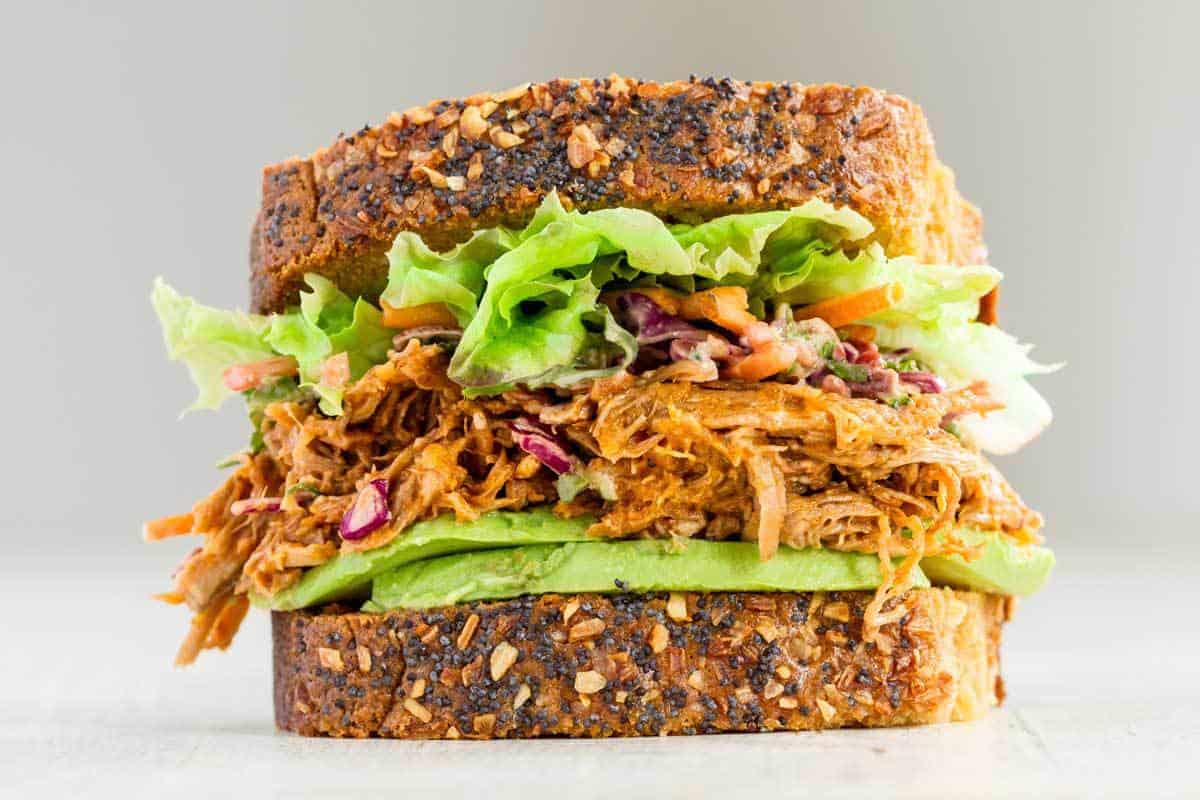 Now just so you know, this ain’t no sandwich you can whip together as fast as a vegemite one, you do have to do a little prep. But once you make everything, you’ll have Pizza bread you can eat for days, taco seasoning you can use to make Fajitas (get a recipe here), mayonaise you can use for anything (it makes good body-paint…or so I’ve been told) and coleslaw you can eat with your left over pulled pork. You could even put it in Paleo wraps like I have below! 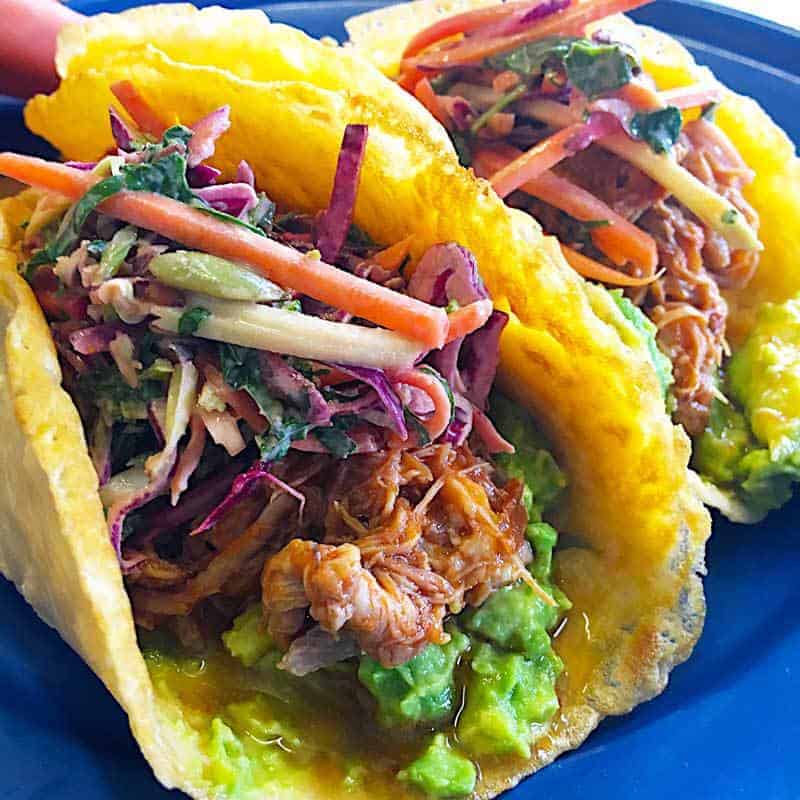 Our booklet also contains loads of other filling ideas for other delicious paleo sandwiches.

In fact I’ve included a list of my 18 favourite sandwich filling ideas to inspire you on your road to Paleo Sandwich Nirvana! #yourewelcome

So if juicy, saucy pulled pork, combined with creamy avo and crunchy coleslaw, piled high between two doughy slices of pizza bread is your type of thing, click the button below and grab your Sandwich Booklet today! 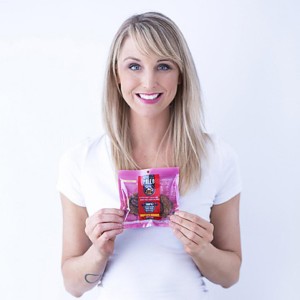 Jen Richards is a children’s book author, therapist at Matrix Re-Jeneration, creator of The Love Project and director of health food company, Rumbles Paleo. Jen’s mission is to create a new type of epidemic; a world-wide epidemic of conscious minded people who have the strength of mind, body and heart to live in the glorious heights of their full potential.